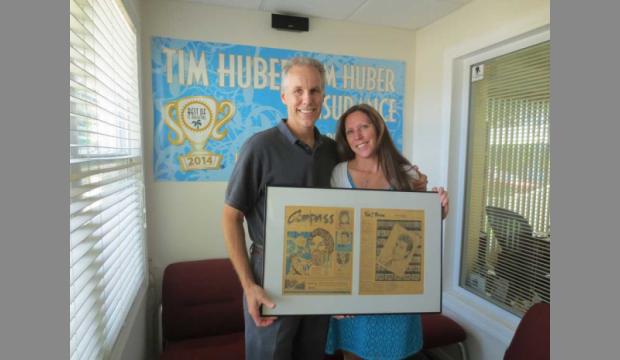 KIMEKO.MCCOY@STAUGUSTINE Tim Huber and his wife, Tammy, stand in front of their 2014 Best of St. Augustine sign at their agency located on Clark Street. 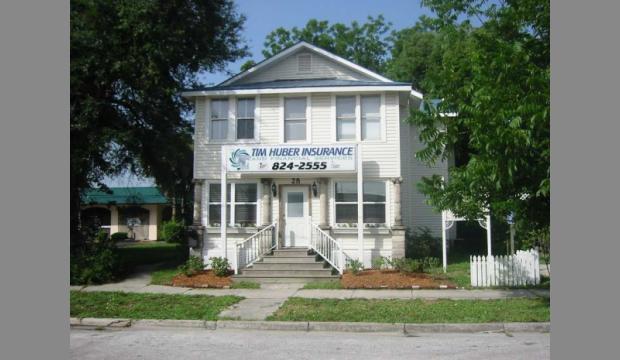 With two kids in diapers, Tim and Tammy Huber took a leap of faith and decided to build their own insurance agency from the ground up.

Both had backgrounds in the insurance industry, so they had the knowhow.

Now, almost 13 years later, the two have managed to keep their family and business growing successfully.

On Wednesday afternoon, Tim, the owner and agent of Tim Huber Insurance, was greeted by clients stopping by the office. The clients asked about his kids and made a few jokes.

Since going independent 13 years ago, Tim has developed a number of client relationships like that one and now represents 50 companies in this state and elsewhere.

The St. Augustine transplant is originally from Connecticut, where winter highs can average 25 to 30 degrees.

"I went from Connecticut, where it’s cold, to Flagler College, where it was warm, to go to school," Tim said.

After graduating with a degree in business, Tim knew he wanted to go into sales, but wasn’t sure what type of sales.

"I honestly never thought of (insurance). When I graduated college, I had no idea what I was going to do. I majored in business, so I knew I was going to do something in the business world," he said.

While on vacation in Connecticut, he met an Allstate employee on the beach.

"He took my resume and sent it down to Jacksonville, and I interviewed down here and ended up going to work for Allstate," Tim said. "He just said, ‘Hey you might want to try this, it’s a very lucrative thing to do,‘ and I figured sure. I’m just on the beach in Connecticut, so that’s how I ended up in insurance."

Tim started his career in the insurance agency as a captive Allstate agent, which meant he represented just one company.

His wife, Tammy, started her career as a clerk in operations, then worked her way up at Allstate before becoming an underwriter.

That’s when she met Tim.

"He was this young, heavy-hitter agent and I don’t know," she laughed.

The two married and 13 years ago, Tim decided he wanted to go into business independently.

"It was a little bit scary because we still had two kids in diapers and we were looking at not making any money for the first years and it was tough, but we made it work," Tammy said.

While looking for a building to settle the business into, a Realtor introduced Tim to a property at 28 Clark St.

Originally, the two-story property housed psychologists on the bottom floor, leaving the top floor open to be rented.

It would be something to work with, but Tim liked that fact and the location because it faces US 1.

"I had some people help me, so I was working through the afternoon and evening doing construction and then doing insurance during the day. So I’d go home and sleep three or four hours, then come back to work," he said.

It took about six to eight months, but after knocking down walls to create one big office, renovations were complete. The company is still in that location.

The early challenges were like any other business, Tim said. It was a matter of getting finances, picking a location, doing research and then establishing initial clientele.

"From there, starting over was interesting because at that time, we had two young children, so 13 years ago, we went back and started from scratch and then started something that’s about three times the size our original agency was," he said.

Tim said there were periods that caused him a lot of stress, as he was working 100 hours a week in the beginning.

"There’s definitely periods where you go, is the money going to hold up long enough, are there enough hours in the day to do what I need to do and unfortunately, the answer was yes," he said.

Through it all, he credits Tammy as his saving grace.

When the kids were young, Tammy would stay at home with them and often bring them by the office to visit.

"I got to stay home and be a stay-at-home mom. It was fun. It was hard; it’s a really really hard job, but it was a lot of fun," she said.

She stayed close to the boys, volunteering at their school and going on field trips with them until they got older.

"It was great because it gave the flexibility to be able to go on field trips and help out in the classrooms and stuff like that," she said. "Looking back now, I realize how fortunate I was. At the time, it was like, ‘Yeah this is cool. I get to do this, that and whatever.’ But I guess I didn’t really realize how great it was until you’re looking back, like, I’m glad I got to do that."

Now with their kids 14 and 16 years old, Tammy serves as office manager, while Tim is an agent and owner.

Both spend more time with the family.

"Now we get the family vacation, and so I spend a lot of time with my son who’s playing baseball and my other son who’s into cars and guitars," Tim said.

Changes in the industry

Being in the industry since 1987 means seeing a lot of changes.

Tim said the biggest was technology.

When he first started, paper applications were used, where everything was written out by hand.

Now everything is out of computers, and Tim said it’s faster and more reliable.

With all of the changes, Tim’s passion for helping people remains consistent.

"When hurricanes hit, we’re the place that you call. We take care of people," he said. "We’re basically in the business of making people whole."

When hail fell in St. Augustine during a storm a few years ago, Tim Huber Insurance replaced a lot of roofs and repaired a lot of cars.

"We really like our customers and enjoy interacting with them, but most importantly we’re here to help people," Tim said.

WHY WORK WITH US?